The Southern Connector was designed to support the communities of Greenville County and its surrounding areas. But even before this effort, a number of key individuals had already begun shaping and cultivating this rapidly growing region. In their memory, the Southern Connector proudly pays tribute to these leaders for their civic dedication and hard work. 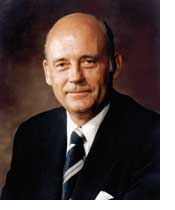 As one of South Carolina's and Greenville's most distinguished business and civic leaders, Buck Mickel's wealth of knowledge and experience as a businessman and public servant made him a trusted advisor and mentor to many throughout the county, state, and nation.

In 1948, after serving in World War II as a United States Maritime Academy Midshipman and in the Korean War as a First Lieutenant in the Corps of Engineers, Mr. Mickel began his remarkable business career with Daniel Construction Company, later acquired by Fluor Corporation of Greenville, South Carolina. He took Daniel Construction Company from a regional player to a global construction giant with expertise in many markets. After Fluor’s acquisition in 1977, Fluor Daniel emerged and became the principal subsidiary of the Fluor Daniel Company, an international engineering, construction, and diversified service company. Mr. Mickel retired his executive position with Fluor Daniel in March 1987, but remained a director until his retirement in December 1997. He passed away July 23, 1998.

Mr. Mickel was the recipient of numerous awards and recognitions for his many contributions and achievements, including our state’s highest honor, the "Order of the Palmetto", in 1977, and was named South Carolina’s "Business Man of the Year" in 1983 by the South Carolina Chamber of Commerce. Mr. Mickel was a community leader who served as a Life Trustee of Clemson University, a trustee of Converse College, a trustee of Brookgreen Gardens, and a member of the Advisory Board of the South Carolina Foundation of Independent Colleges.

For these reasons, it is fitting and proper that the Southern Connector is designated the "Buck Mickel Memorial Southern Connector". May this highway become a visible legacy to all his important contributions to the community.

His leadership helped bring paved roads, electricity, recreational equipment, and better schools to the rural parts of southern Greenville County. Chapman became well known after his volunteer efforts during the flu epidemic in 1918 and 1919. From 1932 to 1939, he was listed in the "Who’s Who in the South".

For his civic efforts in the development of southern Greenville County, the Reedy Fork Bridge that crosses the Buck Mickel Memorial Southern Connector has been named in his honor.

After finishing Augusta Business College in 1905, J. Walter Moon served as Magistrate of Grove Township, Clerk of Court, and member of the House of Representatives from 1921 to 1925. Along with John Harris, J. Walter Moon built and maintained telephone lines from Greenville City limits to Bessie Grocery Store on Augusta Road. He continued to shape the community by building the Moonville Mercantile Grocery Store on Hwy. 25. J. Walter Moon died March 14, 1958.

For his efforts in growing and developing southern Greenville County, the intersection of South Carolina State Highway 25 and the Buck Mickel Memorial Southern Connector has been named in his memory.

Charles H. Rice was a prosperous business owner of Rice Auto Alignment. He served on the Board of Commissioners of Gantt Fire, Sewer, and Police District from 1976 to 1984. Rice was a key community leader and an active member of Grove Road Baptist Church, South Carolina Moose Lodge, VFW, and Sons of Confederate Veterans. He served in the US Navy during World War II and was elected to the House of Representatives District #25 from 1984 to 1988.

Chick Rice strongly believed in the benefits of the Southern Connector and felt it was critical to the growth and development of the Upstate. In his memory, the intersection of the Buck Mickel Memorial Southern Connector and South Carolina State Highway 20 has been named the Charles H. (Chick) Rice Interchange.

Charles Pack Willimon was born in Greenville in 1925. He attended Greenville High School and graduated from Clemson University in 1949. After working for the Agricultural Science Department for four years, he returned to his roots in Greenville to operate the family farm off Fork Shoals Road.

Shortly after, Willimon became interested in golf course management. In 1961, the Bonnie Brae Golf Club was built on the Willimon farm, and he worked at the club until 1998. During this time, he was elected President of the Carolina Golf Course Superintendents Association, and in 1994 was awarded its Distinguished Service Award.

For his steadfast commitment to his community, the intersection of Fork Shoals Road and the Buck Mickel Memorial Southern Connector has been named in his honor.